One of my proudest cake-related achievements to date remains the Wizard of Oz Cake I did last year for a lovely little girl’s fourth birthday. Amazingly, twelve whole months have trundled by and that lovely little girl just turned five, and requested a Pirate Treasure Chest Cake to celebrate the fact. The cake needed to feed 25 five-year-olds and associated grown-up types, so I used my adjustable tin to make a cake measuring 10” x 7”. Annoyingly, I only have one of these beauties so I had to mix up and bake the three sponges separately, which took about 3 hours.

Three 10” x 7” Vanilla Sponges
This is a basic Victoria sponge mix, so these approximate weights are only a shopping list guide; if you bake this, weigh your eggs in their shells and use the same weight in sugar, butter and flour.

Beat the butter until soft, add the sugar and beat for a good few minutes until pale and fluffy. Break the eggs into a jug and beat together with the vanilla extract. Add to the butter mixture a tablespoon at a time, beating well between each addition. Sieve the flour in and mix slowly until combined, then add the milk and beat until smooth. Pour into buttered, lined tins and bake for about 25-30 minutes, testing with a skewer to make sure it’s properly baked. I covered mine loosely with foil at the 20 minute mark to stop the top becoming too coloured.

Due to time constraints, I made the sponges in advance, wrapped them in baking paper, then cling film, then foil and froze them for a week until the night before party day, when I let them defrost overnight before assembling.

Chocolate Ganache
I made a ludicrous quantity of ganache because the idea of running short filled me with fear, but this quantity should be about right:

Finely chop the chocolate and throw in a heat-proof bowl. Over a low-medium heat, slowly bring the double cream and Golden Syrup to a boil. Pour over the chocolate and stir VERY SLOWLY in concentric circles starting in the middle. Be patient. For a long time, it’ll look like it won’t emulsify but it will. Do not be tempted to speed up your stirring. When it has emulsified, throw in the butter a few cubes at a time and continue stirring gently until it’s all in and melted. You’ll have a beautifully glossy ganache. I popped mine in the fridge to get to a good spreading consistency, which took about 1½ hours.

In the meantime, I set to work making props: edible sand, sugarpaste starfish, sugarpaste barnacles and a sugarpaste treasure map.

This is a highly complex procedure so buckle up: throw all the ingredients in a food processor and blitz until it looks like sand.

(One has to wonder what happened to one’s life when one finds oneself getting up at 6.30am on a Saturday to make edible sand…) 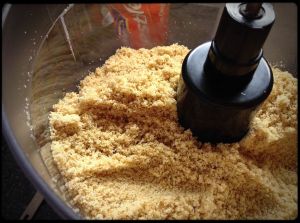 Sugarpaste Starfish
I mixed up a pink sugarpaste and cut two fat stars with biscuit cutters (one smaller than the other), rounded the edges with my fingers and curved a couple of the points in random directions. I used a rounded modelling tool to make indents into the middle between the points, and a pointy tool to make holes along each point, and finally stuck some pale yellow spots on with egg white.

Sugarpaste Treasure Map
I added a little brown gel colouring and a little copper gel colouring to a chunk of white sugarpaste and manipulated it just until it was subtly marbled, so that it looked like it had been grasped in grubby pirate hands over a decade of dedicated searching and swashbuckling. (What is swashbuckling?) I cut out a wobbly rectangle, made random dents and nicks along the edges, and used a paintbrush and gel colouring to paint the detail freehand. I set the map aside on the edge of a plate in the hope that it would dry slightly buckled but the moisture in the ganache made it flop when it was on the cake. I think it’s probably worth setting it wonky if it’s not going to sit on ganache, though. 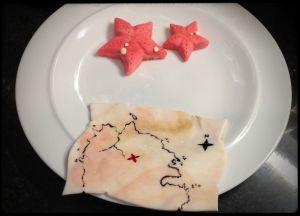 Sugarpaste Barnacles
I added a little more food colouring to the sugarpaste left over from the map, and fashioned two shell shapes, then used the rounded tool to create dents and pointy tool to rough the edges up a bit.

Next came the big build…

I wanted the chest to look like it was slightly open, but I didn’t want to get into the realms of propping up the top sponge for fear of it collapsing or breaking in transit. Instead, I just sliced an angled chunk out, into which I could stuff pirate treasure, and shaved the back edge of the lid a little. Then I used the ganache to create a dome-shaped top. 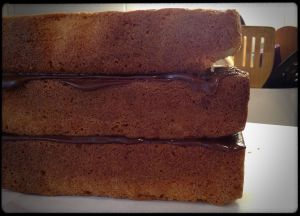 Optical illusion. Or something. 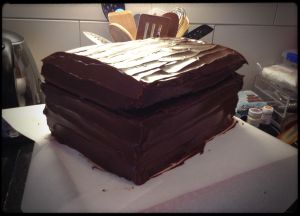 I rolled out some brown fondant and cut strips about 1½cm wide, then used a round pin-head to indent it to look a bit more ornate. I used a ruler to create a line down the edges and brushed the lot with edible copper lustre dust. I applied the strips to the cake in a slightly slapdash piratey fashion, then popped silver dragees in the corners etc to look like rivets. 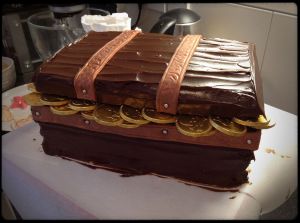 I stuffed the open bit with chocolate coins, removed the baking paper protecting the board and put the other props in place, including the edible sand and some pre-bought edible gems. 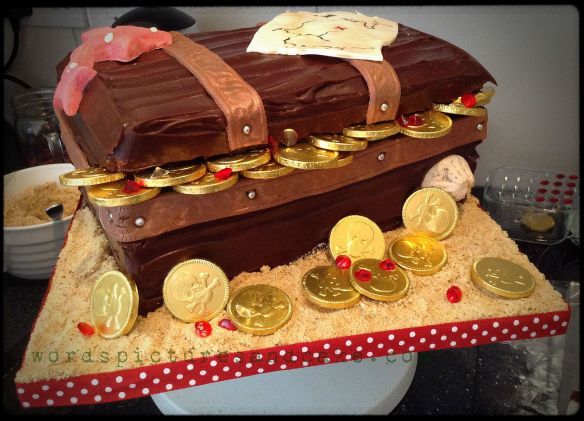 I bet my Mum likes the ribbon most* 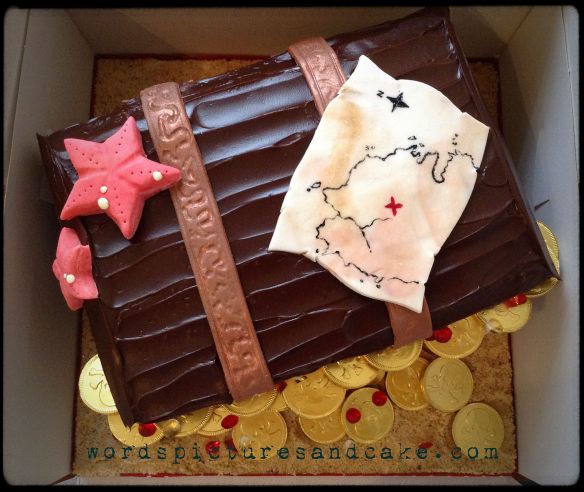 * When I made the Wizard of Oz cake last year, I spent HOURS working on every detail, and the one thing on which my Mum specifically commented was the addition of the blue gingham ribbon around the edge of the board, i.e. the only thing I hadn’t fashioned from scratch with my own hands. I doubt I’ll ever let her forget it.