My very favourite small person in the whole wide world (to whom this kind of statement is currently of the utmost importance) is a delightful four-year-old called Annabella.  Her very favourite film in the whole wide world is Disney’s “Tangled”.  As is “Hotel Transylvania”.  And probably three or twelve more films.  But “Tangled” is in the top twenty, at least.  So, after a couple of months’ careful planning, blueprint sketching and the purchase of one plastic model, the time finally came to construct a Rapunzel cake for Bella.  (There’s a chance I was more excited about this than she was…)

I baked this in two batches because there was only room in my oven for two 26cm tins at a time (and I imagine my mixer might’ve struggled to accommodate a double batch).

Preheat to 180C.  Mix cocoa and boiling water to a smooth liquid, then stir in the bicarb and set aside.  Melt the chocolate gently in a bain-marie and set aside.  Beat the butter until creamy, then gradually beat in the sugar and beat for about 5 minutes until very pale and fluffy.  A bit like this… 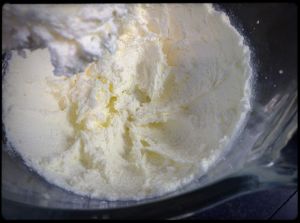 In a separate jug, break up the eggs and vanilla with a fork, then add it to the butter/sugar one tablespoon at a time, beating thoroughly between each addition.  Fold in the flour in three batches, alternating with the soured cream.  Go easy on the beating at this stage.  Mix the cocoa liquid with the melted chocolate (and resist the urge to lick any errant chocolatey goodness from your fingers – the bicarb does not a tasty experience make) then fold it in to the cake mixture. 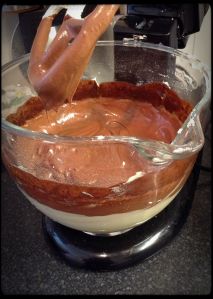 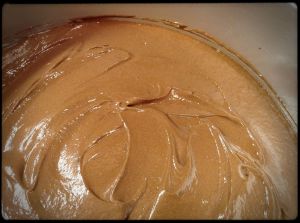 Make sure you do the skewer test before turning onto a wire rack to cool. 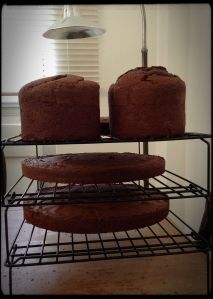 Initially, I was determined that the entire cake would be edible, but a little guiding voice popped into my head (as it did on a number of subsequent occasions – usually when my quest for perfection had spun out of control).  That phrase?

“THIS IS FOR A FOUR-YEAR-OLD.”

Instead, I opted for a more sensible mid-section structure of polystyrene, which also meant I didn’t have to bake a random conical cake.

So, in terms of scaffolding, we have a wooden spike at the bottom that was eventually hammered into the base board to make sure nothing tilted nor toppled, then a 10cm board, which would be supported by plastic dowels hidden in the bottom cake so that the tower didn’t sink, then a polystyrene cone, from which I had chopped off the bottom section.  I inverted that section and chopped it down with a craft knife to make that beamy supporty bit under the house.  (That’s an architectural term.  Ask anyone.)  Then there was a board for the house cake, through which I’d made a hole for the wooden spike to go into the house to ensure it didn’t fall off.  Technical, eh?

Ah.  Fondant.  My NEMESIS.  I’d mind less if it tasted nice, but it looks and tastes like sugary Plasticine and is much more difficult to manipulate.  Flippin’ ‘orrible stuff.  Looks good, though.

I mixed 1kg white with 1kg obnoxiously bright emerald green and got a lovely muted green colour.  I think a total of 1.25kg would’ve been enough as I have a shed-load left over but I’m paranoid about needing to roll the stupid stuff too thinly so I always overcater.

Next up, covering the tower.  I mixed a little chocolate fondant (by Renshaw, in case you’re interested) with white to make a stoney-beige colour, then painted the polystyrene with egg white to make it stick.  I rolled the fondant quite thinly and rolled the polystyrene over it rather than lifting and draping the fondant.  I ran a knife along the join to cut through both overlapping bits and removed the excess from each side to make a sharp seam.  I then took a pin (such high tech equipment – what a pro) and used the head to make stone shapes in the fondant. 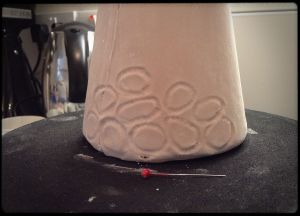 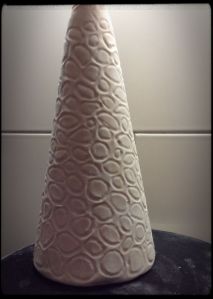 I covered the house pretty roughly, knowing that the rough bits would be covered by beams and other decoration.  Whilst making said decoration, the eagle-eyed among you will notice that I watched “Footloose”.  A classic.

note a young Kevin Bacon in the background

Next came three shades of lilac for the roof tiles, which were individually cut and brushed with a bit of egg white to stick them on.

roof tiles in the making 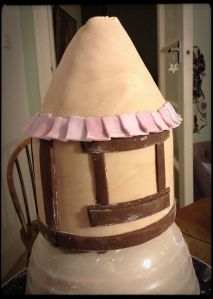 there is a lot of work to be done, here

I decided where the tower would go and sank the plastic dowels into the base cake so that I could see its position while I decorated.  Then I whipped up a batch of green royal icing ready to pipe (1 large egg white, 250g icing sugar, 2tsp lemon juice, green gel colouring). 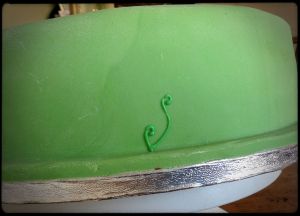 it all starts from this tiny shoot

I did spell it right, right?

up the vines went, right over the tower and up onto the house

Another batch of lilac fondant, a plunge cutter, a paintbrush, some edible glue, a pair of tweezers and a little pot of tiny edible pearls, and we have pretty flowers. 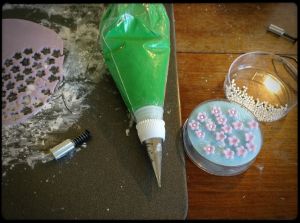 as close as I get to gardening 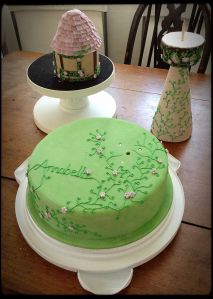 ready to be boxed up and transported to Surrey 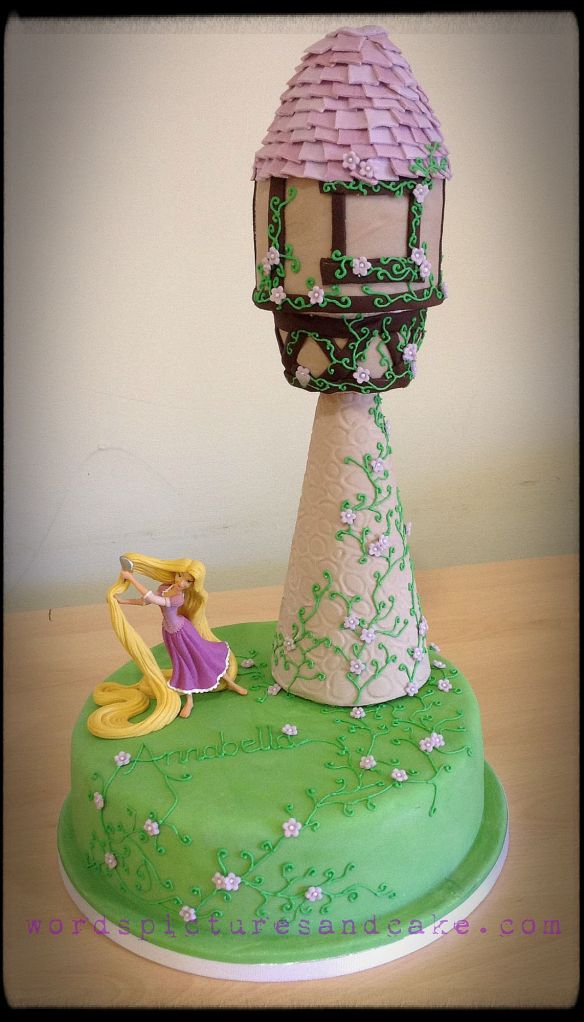 One of the best things about small children is their honesty.  They have absolutely no filter.  Bella’s comments?  “Where’s the glass in the window?”  “Why isn’t Rapunzel in the house?”  “Where’s Flynn Rider?”  Later, though, I overheard her chatting with her little buddies whilst looking at the cake and claiming “I’m going to eat the Rapunzel bit.  That bit’s for me because I’m the birthday girl.”  Well, she’s made of plastic, my tiny friend, but feel free to give it a go.

Later still, she told me, “I don’t like the icing.  I’ll just eat the cake.”  A girl after my own heart.