A very lovely colleague – Natalie – abandoned us on Friday to move back up to her hometown of Derby.  To bid her a fond farewell and satisfy her sweet tooth, I baked Mary Berry’s white chocolate cheesecake, which was absolutely delicious.  As I was catering for lots of people, I increased the recipe by half as much again and baked it in a 25cm springform tin, which worked beautifully.  So the quantities became:

I followed Mary’s instructions; it came out beautifully and was extremely well received.  A little photo-diary, in case it’s of interest: 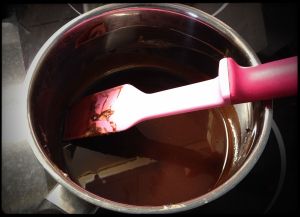 Melted dark chocolate and butter for the base

The lazy girl’s way of combining biscuits and melted chocolate 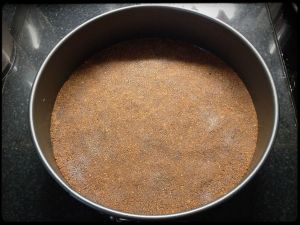 Cheesecake base (a soup spoon works beautifully for this, by the way) 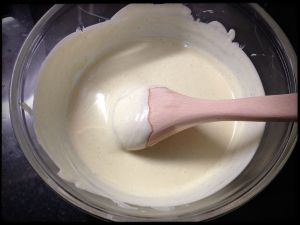 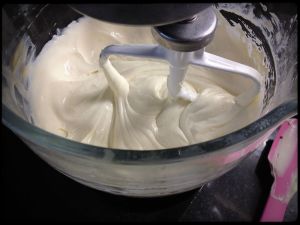 Now, I’m rarely enthusiastic about white chocolate and – to be perfectly honest – I’m not exactly a superfan of cheesecake either, but this was rather delicious.  The soured cream balanced out the sweetness of the white chocolate, the texture is light and the chocolate in the base lends a little decadence.  Not that one really needs extra decadence in a dessert that contains 4½ bars of white chocolate…