There are some very good reasons why places like Ladurée charge a small fortune for their beautiful, uniform, delicious macaroons.  One of those reasons is the fact that it’s exceedingly difficult to make a decent batch yourself at home.  I’ve made chocolate macaroons several times with varying degrees of success, but never have I been moved to throw a batch in the bin.  Pink ones, however…

My gorgeous cousin Lucy (aged 11) gave me a beautiful book by Peggy Porschen for Christmas, which is packed full of delightful recipes and decorative ideas to which I aspire.  Ms Porschen’s macaroons jump off the page as tiny squidgy circles of joy, so I chose her recipe for this project.  Contrary to the chocolate recipe I had used, this one called for an Italian meringue base, which requires a sugar thermometer.  I don’t have a sugar thermometer but I found myself uttering the question, “Meh.  What’s the worst that can happen?”  I really should know myself well enough by now to know that this is when I should down tools and either procure a sugar thermometer or choose a different recipe.  I didn’t.  Can you see where this is heading?  I’ll take you on a whistle-stop tour of things I did wrong, then we’ll get to the second attempt…

Absence of sugar thermometer necessitated some educated guessing.  No idea whether this was a problem or not.  If it was, I suspect it was quite far down the list…

Peggy Porschen’s recipe tells you to reserve 1tbsp of egg white and colour that before adding it to the Italian meringue, which is fine if you know what impact your colouring is going to make.  Sadly I wildly underestimated how much colour I’d need so the pink was far too pale, and then browned in the oven.  So I got a rather insipid peachy colour.  Hurrumph. 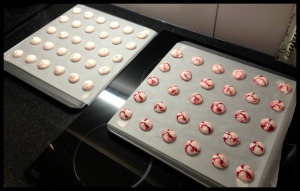 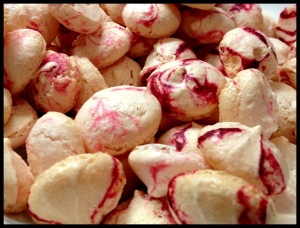 So, I was annoyed about the colour and that was entirely my fault, but I was more annoyed by the lack of characteristic foot on the bottom of the macaroons.  These were just fairly bland mini meringues.  Hurrumph (again).

On to my second attempt, for which I sought a different recipe that bore more resemblance to the chocolate recipe of Pierre Hermé with which I was already familiar.  This recipe was courtesy of the fabulous and reliable Pink Whisk.

Wounded from my previous failure, and therefore even more suggestible than usual, I was helpless against the claim on The Pink Whisk website that it is nigh-on impossible to make macaroons without a food processor.  As I’ve “needed” one a few times recently, it seemed a justifiable spoil (and it was the cheapest I could find). 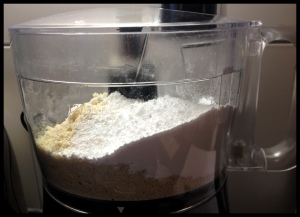 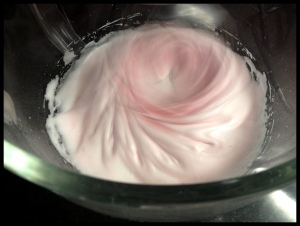 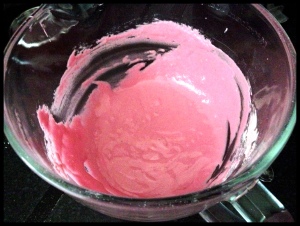 I did follow the instructions to the letter, but I suspect I may have folded  a few too many times, so my lovely pink macaroons are a little flat and a little larger than I had intended.  Not bad, though, eh? 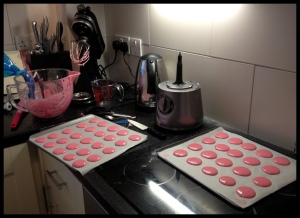 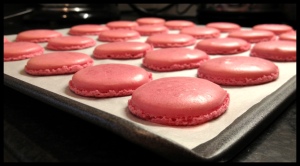 Pink Macaroons – feet! They have feet!

Well.  They’re not perfect, but I am rather pleased with them nonetheless.

Update (1 April 2013):
And here they are in all their glory, as part of the Scarlett Willow photo-shoot…