Last September, I made a rainbow cake for my lovely friend Jo’s birthday while we were on our Cornish holiday, and I was absolutely tickled pink when she and her husband Chris recently asked me to bake for their delicious daughter Sophie’s Christening.  As a variation on a theme, we chose a cake of six layers in different shades of pink rather than rainbow colours.

My first consideration was how best to decorate the cake.  While I have dabbled with a bit of piped writing, I’m not sufficiently confident with my skills to risk piping Sophie’s name directly on the cake for such a prestigious event.  I decided, instead, to use rolled fondant to create pretty bunting on which I can pipe individual letters.  Cop out?  Perhaps.  But a lower risk strategy, for which I shan’t apologise.  So, I sat down to plan it out, mix the pink fondant and start fashioning some pretty things with it.

At this point, I realised exactly how hard it was going to be to pipe tiny lettering onto the bunting, so I asked my phenomenally talented friend Stephanie to help me out.  When I say ‘phenomenally talented’, I really mean it.  She is the creator of the most incredibly beautiful biscuits, which she sells through her business, Ice My Biscuit (follow that link and like her Facebook page – you will be regularly stunned by her creations).  I spent a couple of hours in Steph’s studio, during which she transformed my understanding of icing and the way it behaves in a piping bag.  I can even pipe straight lines now, and it’s all thanks to Steph!  After copious trials on plates, I was sufficiently brave to give the bunting a bash (please note the date has been abbreviated due to a couple of casualties in the bunting department).

The next stage was to consider my strategy for the pink sponge.  Of course, a standard vanilla sponge comes out a lovely pale yellow colour, which is perfectly acceptable in many scenarios but for a cake on which I’d like the pink shades of the icing to match the pink shades of the sponge as closely as possible, this is problematic, so I embarked upon a few trial runs to see whether I could come up with a solution.

Project Pink: Experiment 1
Eggs, butter, white caster sugar, flour, vanilla extract (fluid)
The pink shades of the sponge seem acceptable until you compare them with the shades in the icing shapes, when the sponge starts to appear rather peach-y.  Conclusion: it would do, at a pinch, but is not ideal.

Project Pink: Experiment 2
Egg Replacer Powder, butter, white caster sugar, flour, vanilla extract (paste)
I tested the vanilla paste to see how visible the vanilla seeds would be and I’m perfectly satisfied that they don’t negatively impact the appearance of the sponge.
Egg Replacer powder is a weird substitute I acquired when I baked for my vegan friend, Martha, which requires 1½ tsp powder to be mixed with 2 tbsp water before mixing the sponge as usual.  The vegan chocolate cake I baked for Martha last year was absolutely lovely; the difference in taste from a non-vegan chocolate cake was perceptible but acceptable, and the rise was exactly the same.  Not so with these pink cupcakes, as you will see.  Conclusion: fail.

Project Pink: Experiment 3
Egg whites only, butter, white caster sugar, flour, vanilla extract (paste)
I discussed Project Pink with Angharad (who – you may remember from previous posts – is a genius), and, with some degree of inevitability, she found the solution in the form of this recipe from an American blog.  I halved it in order to do a trial run without too much waste, the results of which are below.  The whisked egg whites need to be carefully folded in without losing the air, which means that the colouring stage has to happen before the egg whites go in.  Conclusion: we have a winner.

I realise this might just be the longest blog post in the history of t’internet, for which I apologise.  The final stages are purely photographic…

NB When I baked the trial, the cupcakes domed magnificently, so in order to prevent this happening and try to get an even rise, I made a shallow crater in the first batch of three sponges (the bottom three layers).  As it turns out, they didn’t dome at all and they actually baked with the craters still in tact, as you will see more clearly in the final photograph.  Lesson learned. 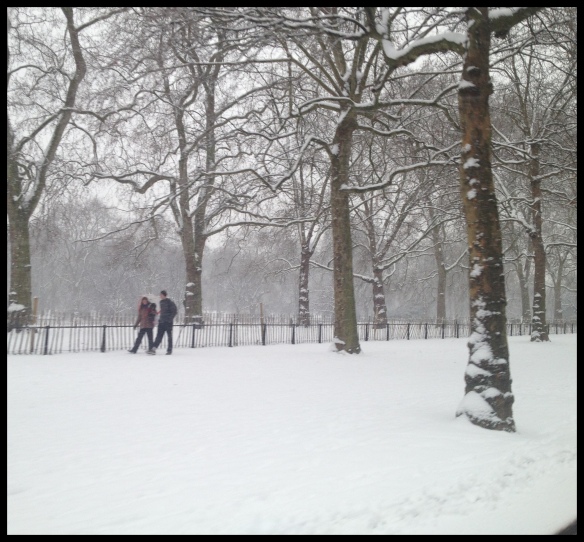 London in the Snow – a nice day for a white christening

Pink Layer Cake. Done.  (Apologies for the blur – I was shaking.)

7 thoughts on “Christening Cake for a Beautiful Little Girl”